The Story Of Mary's Hope Begins In November of 2016

The Story of Mary’s Hope Begins inn November of 2016.  A group of parishioners from Holy Family Catholic church in Clemmons, NC traveled to Guatemala to experience a short-term mission trip. During the seven days that they served individuals, families and communities in the country, they witnessed unimaginable hardships, suffered by children and adults. They saw groups of individuals at the Guatemala City Dump risk their lives searching through trash in hopes of finding recyclable items that would bring them one to three dollars. They helped feed 400 children the only meal that they would receive that day. Their hearts ached when they were instructed not to give too much food to any one child. They were told that they had to make sure there was enough for all. When the parishioners brought baskets of food and water filtration systems to individuals, they saw extreme poverty. Guatemalans deprived of their basic needs, including food, safe drinking water, shelter, education, and health care. Returning to their homes in North Carolina, the parishioners could not forget what they had seen. The people they served had shown such gratitude that they were moved to reach out and help them. After much contemplation, the non-profit Mary’s Hope was born. Mary’s Hope Inc. offers children an opportunity. 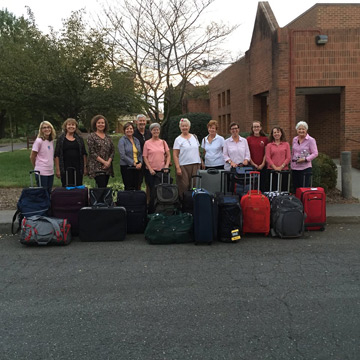